The jokes have been read and judged by an independent panel – there were laughs, sniggers and groans  but these three are the triumphant winners:

Two Cats are swimming across a river.  One’s name is “One,Two,Three” and the other ‘s name is “Un, Deux, Trois”.  Which cat makes it across?

I was looking at the ceiling the other day.  It’s not the best, but it’s up there.

Why are you late Stan?  I was on time until I saw a sign that said “Slow Down, School Ahead”. 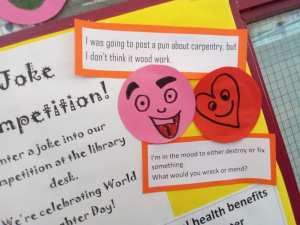